Oaklawn saved the day and the weekend.

The Kentucky Derby, originally scheduled for the first Saturday in May, has been moved to September because of the corona virus. The original day for the Derby was May 2. 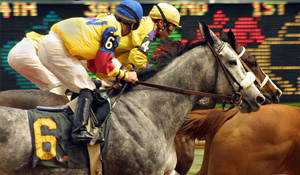 As usual it was going to be a big weekend for me. Just a little more important than other Derby weekends. I will be 65 years old on May 1. Horseplayers always have excuses to play the races but at this time of year I always had the best excuse available since my birthday came about the same time as the Derby. And since I have my Medicare card I was going to have a big time Derby weekend 2020.

The normal Derby weekend would begin by a reminder I would give my wife. She was forbidden to ask me to do anything – cut the grass, take out the garbage – you name it. I always tell her it is her job to take care of the food for the weekend. Most importantly she must appeal to my southern taste and heritage by making my favorite thing – peanut butter pie. My wife makes the best one in the world. She has learned that the weekend always starts on Thursday night, the eve of the Kentucky Oaks, which has been postponed also. Plus, I tell my office not to call me and simply leave me alone until the Monday after the Derby.

You can only imagine the disappointment I felt when this Derby was postponed and since it was my 65th birthday – but that doesn’t mean I have surrendered to the circumstances.

Just a couple of days ago my wife began to tell me she thought we should do this and that (she also mentioned yard work – ugh!) since I would not be occupied with “The Derby.” At that moment I knew I had to summon all of my mental powers and think of a way out of the impending doom. And then I remembered.

“No, no, no,” I responded to her. “They are running the Derby the weekend of my birthday.”

She looked at me funny and asked, “When did this happen?” I quickly came back with, “Just a few weeks ago. And they will run the big handicap race that weekend also,” I exclaimed with excitement.

Whew…I dodged the bullet. Of course she doesn’t know I’m talking about the Arkansas Derby and all the other races Oaklawn will have. It was a great idea by Oaklawn to pounce on that date when Churchill Downs delayed the Kentucky Derby. They saved a lot of us from being in a state of deep depression. They saved my 65th birthday plans. I will get to have my big weekend thanks to Oaklawn Park.

Just don’t tell Mrs. Parker the truth. If you do, I will be in serious trouble. I won’t get to play the races that weekend – and I’ll not get my peanut butter pie.