Let me tell you a story as why Premier Turf Club really does protect the horse player on their site.

One of the more stranger occurrences happened just over a week ago at Hialeah race track. For the first time ever I didn’t win the leg I had “ALL” in it.   I have joked in the past saying I should win this leg, except if they add a late entry. Well, they kind of did. Never seen this happen before.

Here is how it happened: I played the early pick 4 at Hialeah. Took two horses, key, all, three horses.  Total ticket cost $27.00. Won the first two legs, didn’t pay that much attention to the 3rd race as I felt it was impossible, hence the ALL leg.    I even watched the race in the smaller multiplayer screen, noticed the three horse won the race, thinking something didn’t seem right. Sure enough, I didn’t have the 3 on the ticket, knowing full well I hit the ALL button.

Right after the race the track announcer, Peter Aiello, did say hold all your pick 4 tickets until after the 4 legs are completed. I hit the last race but didn’t get paid out; how is this possible I thought when the only leg I missed was the all leg.   I eventually found out the 3 horse not scratched when betting opened, but then tote had the horse scratched for about 30 minutes (before the 1st and until just before the 2nd race was run). Sorry for the long story, but it ended up that Hialeah decided they would pay a consolation 3 out of 4.   So my 3 out of 4 ticket, getting it 9 times returned a whopping $33.50, basically $3.75 each ticket.

During the current day in question I spoke with Todd Bowker, the GM of BetPTC, and he said he would look into it. A few days later I get an email from Todd and his staff saying, “you are now getting the proper payout of almost $600.” I know he and his staff spent some time on this, which they didn’t have to, but they did. I am quite sure they had to convince Hialeah to correct the tote error. Not blaming Hialeah, tote errors happen from time to time. Just be fair to the player. Also found out it was Peter Aiello, the excellent track announcer/simulcast director at Hialeah that also agreed to make the proper payout. Peter “gets” the horse player as well, as he obviously is a horse player himself.

I wanted to tell everyone this story because I would like others to know that Premier Turf Club is concerned about the best interest of the horse player, and this long winded story proves it.

Thanks for caring about the horse player. 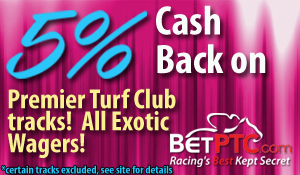