Analysis: Sol the Freud comes back to dirt and Saratoga where he did very well last year, and he gets Velasquez to ride while dropping in class.  Groupthink comes back to the wars after a lengthy rest but for a trainer that does well with his layoff runners. Ogermeister’s last was good, he runs for the dangerous Wesley Ward and from across the pond the pilot is Frankie Dettori. Handy Stan has plenty of speed and comes out of open company. A coast to coast danger.

Analysis: Broad Rule has the back class to whip these and he should get a good stalking trip from the outside.  Cherokee Artist ships in from Jersey and drops after a stakes victory. Piquant has been knocking on the door in his last three and will have the tactical speed to be positioned well. Frazil runs for the dangerous trainer Linda Rice and was right there with Piquant in his last race. 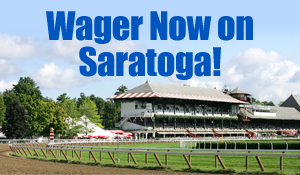 New! Wager on Saratoga at BetPTC.com