The $500,000 San Antonio Invitational on Saturday at Santa Anita has the feeling of championship fight as three of the top older runners in the country will all square off. Grade 1 winners California Chrome, Shared Belief, and Hoppertunity headline a field of nine runners in this truly exciting early season matchup. California Chrome has enjoyed some of his biggest wins at Santa Anita and the last time he raced there he finished third beaten a neck in the Breeders’ Cup Classic. After a Grade 1 grass win last time he returns to the main track and will again be ridden by Victor Espinoza. Shared Belief tuned up for the San Antonio by winning the Grade 1 Malibu Stakes over Conquest Two Step who came back and won the Palos Verdes last week. He’s two for two at nine furlongs and with his good tactical speed he shouldn’t be too far off the early leaders. Hoppertunity comes into the San Antonio off two straight big wins including the Grade 1 Clark in November and most recently the Grade 2 San Pasqual at Santa Anita. He’s proven to be versatile and other than Alfa Bird on the outside, there isn’t a ton of speed in this race. Don’t be surprised if he’s forwardly placed with his inside post. Outside of the big 3, Tonito M. could be an interesting price play as he likes to come from off the pace and always seems to run his race, with 7 wins from 15 starts. If Cal Chrome and Shared Belief add more flames to the fire early on then Tonito M. could be the one who picks them up late.

The Grade 2 San Marcos and the Grade 3 Bob Lewis Stakes are the undercard features. The San Marcos drew nine runners who will go long on the grass, with the red-hot Finnegan’s Wake stationed down on the inside. He’s won a pair of Grade 2 races in his last pair and figures to be a big contender once again with Victor Espinoza in the irons. Dynamic Sky didn’t fire his best effort in the San Gabriel but he had some traffic trouble in that race. He’s battle tested on the grass and if he can get a better trip he could have a say late in this one. In the Bob Lewis Stakes it will be a rematch of Dortmund and Firing Line who put on a memorable show in the Los Al Futurity in December. Dortmund got the win that day but both horses are so lightly raced that improvement as they come into their 3 year old campaigns is certainly possible.

BetPTC.com Selections for the San Antonio

BetPTC.com Selections for the San Marcos

BetPTC.com Selections for the Robert Lewis

The Grade 1 Donn Handicap tops a monstrous 13 race card at Gulfstream Park on Saturday. Lea is back and looking to defend his crown in this race and he’ll face nine other runners in the mile and one eighth event. Lea returned to the races in the Hal’s Hope Stakes at Gulfstream last month after being on the sidelines for 11 months. He looked like he didn’t miss a beat as he closed from off the pace to get the win. He should be cranked up more for this start and will once again be ridden by Joel Rosario. Constitution drew the rail for the Donn and returns to Gulfstream Park, a track he’s three for three at including a win in the Grade 1 Florida Derby. Last time out he ran a decent third behind Hoppertunity in the Clark Handicap, beaten less than two lengths. Todd Pletcher sends out Constitution and will also send out Commissioner who is breaking right next to Constitution. Commissioner has only seen the winner’s circle twice in his career but he’s coming off a good comeback third place finish in his most recent. He had been off since running second in the Belmont Stakes. East Hall has come into his own in recent starts and while this will be his toughest start to date, he figures to be a player for the exotics, if not the win.

The Grade 1 Gulfstream Park Turf features a field of nine including Grade 1 Imagining. Imagining has been keeping some extremely tough company and while he hasn’t won since last May’s Man O’War Stakes at Belmont, he’s been in the hunt against the best turfers in the land. He’ll have to face off with the up and coming Mshawish. Mshawish has been very strong in his last two races at Gulfstream Park, both wins including a score in the Grade 2 Fort Lauderdale.

The Grade 3 Fred Hooper drew a field of twelve at one mile on the main track. Sprinter Grande Shores drew the rail and will try to stretch out as he’s been focusing mainly on six and seven furlong events. He likes to come off the pace so it’ll be important for him to have that same kick with an extra furlong or two. Todd Pletcher will send out Race Day who freaked last time out when getting to Gulfstream. Over the years Pletcher has excelled with horses like this at Gulfstream so he very well could fire another big one and win this. Grade 2 winner Valid will take lots of money and should be part of the pace, but he always takes lots of money cause of high speed figures and isn’t exactly a win machine. The Grade 3 Suwannee River drew fourteen runners for the grass event including former Grade 1 winner Rosalind who will look to get back on track after a pair of dull grass efforts. Bill Mott will send out White Rose who is coming off a huge stakes win at Keeneland. She’s not a graded stakes winner yet but she’s a very solid runner and should be flying late.

BetPTC.com Selections for the Donn Handicap

BetPTC.com Selections for the GP Turf

BetPTC.com Selections for the Fred Hooper

BetPTC.com Selections for the Suwannee River 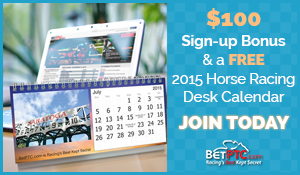 The $200,000 Withers Stakes continues the march towards the Wood Memorial and Kentucky Derby as the Aqueduct Saturday feature. El Kabeir is coming off a huge win in the Jerome Stakes last month and figures to be a big favorite in this spot. He’s won two straight and showed a new dimension last time as he came from just off the pace to pick up the win by almost five lengths. He’ll be taking on a group of recent impressive maiden winners but no stakes winners. In fact General Bellamy finishing third in the Jerome is the only other stakes-placed horse. Classy Class drew the rail for the Withers and is coming off a fourth place finish in the Remsen which included some very talented runners. George Weaver will send out Tencendur who is coming off a nice maiden score going two turns at Aqueduct. He finished third in his debut behind Farm From Over and came back to win his second start. Far From Over won that debut for Todd Pletcher and will be ridden by Manuel Franco in the Withers.

The Toboggan Handicap drew a field of six including the red-hot Salutos Amigos, who has been a new horse since switching to the barn of trainer David Jacobsen. He’s coming off two straight wins and finished ahead of Mewannarose in both of those starts who is also in the race.

BetPTC.com Selections for the Withers

Longshot: Far From Over

BetPTC.com Selections for the Toboggan