Churchill Downs will kick off the annual spring/summer meeting on Saturday night with a 6pm first post time. The season feature of course will be the Kentucky Derby next Saturday, but the opening night card features eleven races including the William Walker Stakes. The Walker Stakes sees the 2015 debut of Blofeld who is already a multiple Grade 2 winner. He’s a perfect 3 for 3 so far in his career for trainer Todd Pletcher and figures to be well backed at the windows. The Steve Asmussen trained Cinco Charlie will be returning to Churchill Downs where he won the first two races of his career at. He broke his maiden in his debut and followed that up with a win in the Grade 3 Bashford Manor Stakes underneath the twin spires. Senor Grits was third last time out in the Swale Stakes and should appreciate the class relief in this spot. Julien Leparoux will be getting back on board of Senor Grits and they teamed up for a win last time they ran together.

Racing at Churchill Downs will generally be run on a Thursday through Sunday schedule with twilight racing on Thursdays starting at 5:00pm EST. Regular post time will be 12:45pm EST and special early post on Kentucky Derby and Oaks Day at 10:30am EST. 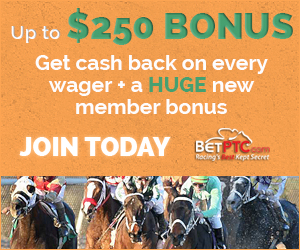 The $200,000 Excelsior Stakes on Saturday will test the eight runners with a mile and one quarter challenge as it tops the Saturday program. Last year’s Wood Memorial winner Wicked Strong will make his return to Aqueduct for the first time since the Wood. He made his seasonal debut last time out and finished fourth in a very tough edition of the Gulfstream Park Handicap. He should be well suited for the distance increase with that race under his belt and will take a lot of money based on his name and past performances at Aqueduct. Wicked Strong is trained by James Jerkens and he’ll be represented as well by Effinex. Effinex dominated an optional claiming event last time out in his first start of the calendar year and will step back up to graded stakes company here. He did finish fourth in the Grade 2 Hawthorne Gold Cup last year, only beaten three lengths by Red Rifle who is also in this race. Red Rifle had poor starts in his last pair of races and wouldn’t be surprised if he goes back to his front running tactics in here.

North Slope is sent out by the red-hot Kiaran McLaughlin for Godolphin racing. North Slope won the Evening Attire Stakes and finished third last time out in the Stymie Stakes. Turco Bravo won the Stymie Stakes in what was a career best effort for him. He’s drawn the outside post and will have to overcome that to make it back to back.

BetPTC.com Selections for the Excelsior

Indiana Grand and Hastings open up this week

Spring brings with it many track openings and this week it’s Indiana Grand and Hastings Race Course that open up. Indiana Grand opened up on Tuesday afternoon and features great racing with good field sizes. Indiana will race Tuesdays, Wednesday, and Friday afternoons at 2:05pm EST with racing on Saturday evenings at 6:05pm EST. The headliner of the meet is the Grade 2 Indiana Derby which is Saturday July 18th. Hastings Race Course in Vancouver, BC and primarily runs on Saturdays and Sundays through closing day October 12th. Post time is 4:50pm EST with the headlining event the B.C. Derby Day on Sunday September 13th.

Friday Night is the Texas Mile at Lone Star Park

Friday Night in Dallas there will be some great action under the lights at Lone Star Park as a field of 11 runners will assemble for the Grade 3 Texas Mile. The $200,000 event drew a talented group but it’s Sr. Quisqueyano who is coming off a spectacular second place finish in the Grade 3 Skip Away where he was beat by the very talented Commissioner by just a neck. Sr. Quisqueyano won the Sunshine Millions Classic earlier this year and he’s done some good work at the mile distance before, with 2 wins from 7 starts. This will be his first start at Lone Star Park though, but his jockey Edgard Zayas will make the trip to ride him. Ken and Sarah Ramsey will send out One King’s Man who is coming off a sixth place effort in the Grade 2 New Orleans Handicap at Fair Grounds. He should appreciate the class relief and the slight cutback in distance. Hip Four Sixtynine could be an interesting price play as he’s coming off an even effort in the Grade 3 Commonwealth Stakes at Keeneland. He employs a good stalking style and if he gets pace to run at he could be upset minded with a 15/1 morning line.

BetPTC.com Selections for the Texas Mile

Santa Anita will begin the second part of it’s long meet this week and Saturday’s feature is the Grade 3 $100,000 Last Tycoon Stakes. The Last Tycoon Stakes sees the return of Big John B who was last seen running 9th in the Breeders’ Cup Turf behind Main Sequence and company. Prior to that he won a Grade 2 at Del Mar and figures to have a class advantage over most of these. The question is will he be ready off the layoff for trainer Phillip D’Amato who excels with these layoff types. Big John B drew the rail and right to his outside is Power Foot who very well could be his toughest competition. The Neil Drysdale trained Power Foot has a good stalking style and last time out was third in the San Luis Rey at Santa Anita, a Grade 2 event. He has a win at the 10 furlong distance and gets the riding services of Rafael Bejarano. Ganesh will make his second start for trainer Richard Mandela. Mandela is great with horses making their second start for his barn so look for this horse to improve and have a shot.

BetPTC.com Selections for the Last Tycoon

Longshot: Play Hard To Get