CHAMPAGNE TONY (Race 5@HAW, December11, 2013, 6 furlongs, Claiming $12,500) The fourth choice in the wagering left the gate and immediately shuffled back and was steadied forcing him near the back of the pack. He began to rally when the field entered the far turn but was wide throughout and entered the stretch widest of all. He made progress in the stretch and continued to close with interest finishing third a couple of lengths behind the winner.

GAMBLER FIVE (Race 6, @HAW, December 11, 2013, 6 furlongs, Allowance 2L) Part of a favored entry was slow from gate, bumped and steadied, dropping to last and running wide down the backstretch. She began to make progress in the turn despite being very wide throughout and then entered the stretch wide. Ran well and continued with good effort for a third place finish a couple of lengths from the winner.

TEQUILAWYTLIGHNIN (Race 2@LRL, December 11, 2013, 7 furlongs, Claiming $5,000) The third choice broke outward at the start and eventually moved to mid-pack. She was steadied in the middle of the turn causing a delay to her rally and was then forced to swing widest of all for the drive. She closed with determination but finishing third and missing the win by only a head.

SPANGLED BANNER (Race 7@TAM, December 14, 2013, Mile 40 yards, MSW) The odds on favorite was a few wide in the first turn while falling back to the rear of the field. Accelerated nicely down the backstretch but was being held up because of traffic. In the far turn she was checked and pulled back nearing the stretch with no racing room, eventually gaining freedom to run and left the field behind winning by 5 lengths, and it could have been much more.

CONTACT (Race 6@Tup, December 11, 2013, one mile turf, Maiden Claiming $30,000) The favorite broke outward and fell back to last and into the turn. Advanced up quickly down the backstretch and attempted to get through along the rail with half mile to go, but was forced to check with nowhere to go and dropped back. Swung out wide when arriving at the top of the stretch and rallied but just missed. CONTACT’s rider claimed foul for the incident near the half mile marker but the claim was disallowed.

CHAMPAGNE BUBBLES (Race 1@WO, December 11, 2013, 1 1/16 miles, Claiming $25,000) The fourth choice in the wagering bobbled and was tardy from the gate, rushed into the back of the pack in the first turn and was in tight quarters. Dropped back in turn and was then last going down the backstretch. Appeared to be in distress or did not like the kickback and was about a dozen back at the top of the stretch. She was 9 lengths back when the leaders hit the furlong marker just before she began a cyclonic and got up to win by a nose. 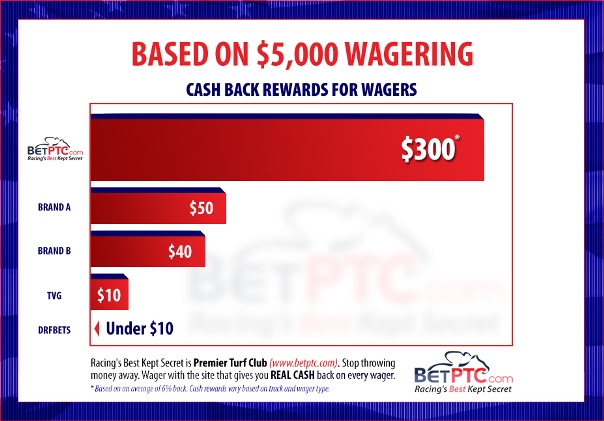