Current Results (since the start of this blog, corrected and updated totals)

Winners’ report: Avenge came right back to break her N1x allowance condition and has now won down the hill twice in three attempts. Looks like a keeper. Yes for Success should have broken her maiden months ago but racing was cancelled at Aqueduct because of cold weather twice when she was entered to run. She broke her maiden in her third start this week, paying a fat $15.20. Protonico devastated the Ben Ali field at Keeneland, winning by five lengths eased up. Deserves another shot at the big boys. Ball Dancing moved forward from her run at Tampa to easily handle the Grade 1 Jenny Wiley. Ball Dancing might be the best grass mare in training by the end of the year not named Lady Eli.

Losers’ Report: Heaven’s Stairway again disappointed in stakes company.  Both stakes runs have been off the board.  I’ll keep her in the stable for now because she has been really good in allowance company.   Far Right and The Truth Or Else ran into this horse named American Pharoah. Maybe you’ve heard of American Pharoah? He’s pretty good. I will keep Far Right because he’s really consistent and he always beats Mr. Z (he’s beaten Mr. Z three straight times). The Truth Or Else got a soft inside run in the Arkansas Derby on a fast track and had no answers, finishing 15 lengths behind the winner. Obvious DROP.

The Truth Or Else (see above).

Lahinch Classics (April 8th, Keeneland Race 5, saddlecloth #6) ran in an incredibly tough N1x at Keeneland, losing to the very talented Radiator, who got a perfect trip while “LC” was parked 5 wide for most of the race. Look for LC to go through her conditions fairly quickly.

Quinta Verde (IRE) (April 9th, Keeneland Race 6, saddlecloth #3) was “grade three placed” in Ireland last year at two but had yet to win until last week. Closed like a freight train and won with something left, she is capable of winning a graded stakes over here.

Long on Value (April 10th, Keeneland Race 9, saddlecloth #2) went to the lead (probably not ideal) on a track that appeared deeper closer to the rail (also not ideal). This horse has a lot of ability and just needs the opportunities to show it. He’s won stakes on both coasts and might be a sneaky threat for the Woodford Reserve on Kentucky Derby day. 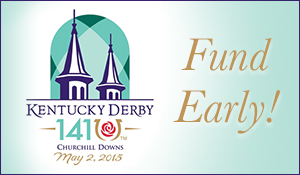