There’s no doubt that California Chrome is the hit attraction on Meydan’s card this week. His presence at morning trackwork has doubled the amount of press and general hangers-on in recent weeks and, as ever, his connections have been a pleasure to deal with.

There will be red faces, though, if the 2014 US Horse of the Year manages to get beaten in the ignominiously-titled Trans Gulf Electromechanical Trophy, otherwise known as the mile and a quarter handicap, on Thursday afternoon.

Curlin strolled home in a similar race when prepping for the World Cup in 2008, but there is reason to think that things might not be quite that easy for Chrome. Godolphin intend to make sure he has a race, and have placed apprentice Eddie Greatrex onboard Good Contact – second on his dirt debut – meaning that he receives eight and a half kilos from the Victor Espinoza’s Mount. Chrome should still win, and win well, but he might be tested, and the weight is something that his Triple Crown-winning rider, Victor Espinoza, is concerned about.

“The weight is a concern for me, because he’s never carried that much before, and 15, 20lbs can make a lot of differen 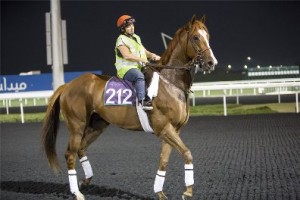 ce to a horse. But most important is the race afterwards.”

That race, the World Cup, is one that got away from Espinoza last year, but he doesn’t seem to have too many regrets.

“He wasn’t 100 per cent, not like he is now,” he says, before adding that an extra Dubai prep is something of an unknown. “Hopefully it will help him just to run one race here, but really, who knows? I will tell you after the race.”

For everyone concerned, let’s hope that particular interview takes place in the winner’s enclosure.

The official feature is the Group 2 Zabeel Mile, which definitely lives up to standard. Safety Check won this last year but faces stronger rivals this time and he’s probably better over seven furlongs. Harry’s Son [Meydan, 16.45] is better off at the weights with him this time and this true miler has every chance of reversing the Al Fahidi Fort form, having apparently improved for that race.

It is interesting that Doug Watson steps One Man Band [Meydan, 15.00]back to seven furlongs in the opening handicap, but he should still be too strong, with Giftorm fancied to chase him home.

Marking [Meydan, 16.10] was all the rage before unseating James Doyle at the start in the Group 3 Al Shindagha Sprint last time and he faces lesser company here, with a win needed to guarantee a Golden Shaheen run. Kifaah has had a tough campaign, but can pick up the second spot, with Kasb also of interest.

The ten furlong turf event is typically open, and Farraaj has been shaping as if a win isn’t far away. He doesn’t have many secrets, though, so this can go to Godolphin’s Think Ahead [Meydan, 17.20], who has been given just a 3lb rise for a tidy win last time over course and distance.

David Marnane has endured a slightly frustrating Carnival, but he can perhaps gain compensation with Jamesie [Meydan, 18.30], who has as good a chance as any of landing the closing turf dash, and has “sharpened up” since his run last time.