#1 Life is Good is a speedster from the Bob Baffert barn with Mike Smith in the saddle. Been off for two months and the barn comes back to score 31% with fresh legs. Smith wins 30% with speed and this son of Into Mischief should improve off the layoff. #3 Medina Spirit is another speedy runner from the Baffert barn and has John Velasquez in the saddle. He should be just off the leader and make a move into the far turn. His 2 bullet works catch your attention. #7 Roman Centurian is a deep closer for Simon Callaghan and has faced some of the top runners in here. This son of Empire Maker will come calling late at a square price.

#1 Storm the Court hails from the Peter Eurton barn with Johnny V in the irons. He makes the turf to dirt switch and a big cut back in distance. He should show close up speed on the turnback and will be a factor with the rail draw winning at 31%. #7 Exaulted is a let runner from the Eurton barn making his 2nd start off the layoff. He is 4 for 4 ITM over the course with Mike Smith aboard. #8 Loud Mouth is a solid stalker making a move up the class ladder. Should make a solid move on the far turn and shoot to complete your exotics.

3 Things to Look for when a new race meet opens up.

#6 Flavius is a late runner making his first start of 2021 for Chad Brown with Flavien Prat aboard. His dam Starformer has 3 starts, 3 wins, and 3 turf wins to her credit. Prat wins 22% with his late runners on the sod and this son of War Front has some nice works to build upon. #1 Smooth Like Straight is a stalker for Mike McCarthy and 5 for 6 ITM over the course. He draws the rail with Umberto Rispoli and he wins 21% with his up close runners on the green. This is his 1st start of 2021. #2 Hit the Road is a late runner with Florent Geroux aboard for Dan Blacker. He is seeking his 4th straight win and steps up in class. Geroux wins 20% with late running turf horses. 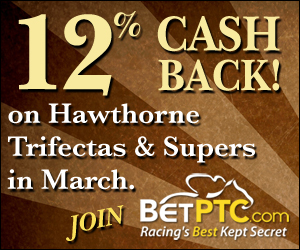 Get 12% back on this track in March at betptc.com

#2 Maxfield is a stalker under Florent Geroux for Brendan Walsh. He is a perfect 5 for 5 and looks to be the major danger. Geroux is seeking his 3rd straight win and this son of Street Sense has the goods. His last race was impressive coming off a beat slow at the break but recovered very professionally. #6 Idol is a son of Curlin For Richard Baltas and always brings his best. Joel Rosario in the irons and should be running late. Maybe the added ground will show a new dimension as Rosario wins 21% with routers. #1 Independence Hall is a son of Constitution for Mike McCarthy. He has been knocking heads with some of the tough guys of racing and gets a rail draw under Flavien Prat who knows the course winning 28% with early stalkers. His bullet work has to give you a good reason to use in exotics.