As we close in on 33 days to the first Saturday in May, I’m really leaning toward a price. I’m not sure which one yet, but there is still plenty of time to do some value shopping. As the next couple of weekends promise to be more than super, be sure to take it all in before declaring your Derby runner. Time is on our side as we get ready to watch and wager on the (G-1) Santa Anita Derby, (G-2) Bluegrass Stakes and (G-2) Wood Memorial. There is still time to build your bankroll, and here are some runners that didn’t give a top-notch effort or had a good excuse. You’ll want to follow them right back as a big effort may be just around the corner. – Best of luck from your friends at BetPTC.com !

Paco Lopez had the call for Jane Cibelli. The filly was coming off a 7 month layoff from Monmouth and working a regular clip at Palm Meadows. She was a handful this day tugging at the rider begging to takeoff and had to check and be restrained. Maybe she’s feeling just fine but needed one to work out the bugs. – I’m watching for her next effort at a price.

Jose Ortiz had the call for James Jerkins and this son of Street Cry was a perfect 2/2 over the sod. His 2nd effort of 2017 was exiting off a win and looked strong around the far turn as Ortiz guided him into a clear lane. He was out-kicked by eventual winner All Included who looked super as the odds-on favorite. Delta Prince may have needed a race just like this to get the competitive juices rolling, and I think we’ll see big things from this guy.

Javier Castellano in the saddle for Chad Brown always has to be respected. This daughter of Tapit flashed a good sign of things to come. Brown is winning at a white-hot (24%) and this was her third start in 2017. She got motoring and looked to have a dangerous turn of foot. This was a step up in class and I think she’ll grow into herself nicely.

Javier Castellano in the driver’s seat for Antonio Sano and they broke from the outside post. This son of Dialed In was ready to give maximum effort and had to be restrained, and then urged to move about the 3/8th’s pole. He never found that comfortable stride, and I’m not tossing out the “Gun” for one average effort. No matter where he lands he’ll be a nice runner down the road.

Florent Geroux in the saddle for Mike Maker.  This son of Kitten’s Joy came in 3/3 ITM and loves the “Big Easy.” – He was a beaten chalk last time out and comes back to win (27%) next up. He was 3-4 wide on both turns and still managed a strong effort.

Take nothing away from the impressive victory of Girvin. He did everything great and did not disappoint the faithful. – Patch was handled by Tyler Gafflione for Todd Pletcher and this was his third start in 2017 with no starts in his two-year-old season. – He bumped his rival and had to gather his composure quickly. After getting it all together he spun three-wide and made a game chasing effort. – Not sure where he’ll end up when the smoke clears, but he’ll get better like a fine wine. 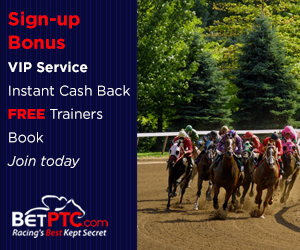