#3 Stonesintheroad is a daughter of Bustin Stones. Rajiv Maragh stays aboard looking for this 3rd straight about this talented filly. She  has easily handled the distance last out and her finish showed plenty in the tank. Trainer Jeremiah Englehardt wis off to the races winning 17% and 26% with last race winners. #4 Forgotten Hero is a speedy gal by Mission Impazible. Mike Luzzi in the irons for John Toscano. She’s going to be forwardly placed but if someone give her the press she’ll get the acid test moving forward. Her last effort was all that and trip to the winner’s circle and Luzzi wins 13% with speed ball runners. #2 Maiden Beauty can layoff the pace and make a bid. She is on the turn back from a mile and I like the idea of mixing her surroundings up a bit. Manny Franco in the saddle and he is scorching at a 23% win clip so far at the Big A. this is her second off the layoff and owns a bullet work to get ready. Winner at a solid price?

#5 Quip is a son of Distorted Humor from the Rodolphe Brisset barn. Keep an eye on this lad as he’s worked with some of the biggest names in racing. Jose Ortiz in the driver’s seat and has been off for 9 months since the Preakness. His works at Payson have been solid and the barn is 44% ITM off long range layoffs. He faced the tough guys last year and cuts back in distance preparing for his spring campaign. #7 Copper Town is owned by Win Star Farm and China Horse Club International for Todd Pletcher. Javier Castellano in the irons and he’s been rolling at a 22% clip to the winner’s circle. I think they’re still trying to find the true meaning of this colt and makes a 2nd off the layoff move since a troubled trip in the gate as a beaten favorite. #3 Breaking Lucky has Luis Saez in the irons for George Weaver. Another runner still trying to find himself and that’s what makes spring at GP attractive. Look for a midpack break second time out this year.

#9 Vasilika is a talented daughter of Skipshot. She is 9 for 9 ITM at SA on the weeds with 8 wins tom her credit. She is 13 for 18 ITM going this far and has the ultra talented Flavien Prat abord winning 24% at the meet. Jerry Hollendorfer is the conditioner and she should calling at the top of the staying out of traffic on the outside. Looks like a lock in this race. #8 Elysea’s World has been off for 4 months coming in from Woodbine in the G1 EP Taylor. She tossed in a dud that day ad comes to California off the break. Bravo to Rosario is a plus on the left coast as he is winning at a 23% number. She is a deep closer and look for her to come rocking at top of the stretch. #6 Amandine is a filly with tactical speed. Drayden Van Dyke aboard and she is 2 for 3 ITM over the SA turf. Look for a close up and DVD to try his hand at wiring the field at a big price. 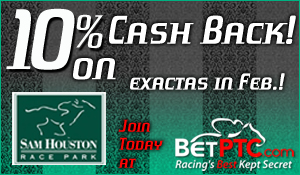 Mother Nature was windy and wet for Kentucky Derby 143. – But that’s horse racing. – The world wanted to see a spring-like day with sunshine and packed stands. Well the latter may have held true, and the weather couldn’t dampen the spirits of the racing faithful. – Hope you had a great Derby weekend, and best of luck from your friends at BetPTC.com !

Joel Rosario in the irons for Chad Brown. This daughter of Candy Ride was making her second start of the year. She has solid works over the Churchill surface and was forced to check sharply and bumed soundly as the odds-on favorite.

Javier Castellano in the saddle with a son of Lookin at Lucky. 2nd  off the layoff and was working well in the morning. He was bumped at the start, caught in tight, and bumped around through most of the race.

Brice Blanc in the driver’s seat for this daugher of Union Rags making her second start off the shelf. Two straight bullet works and she broke awkwardly making up solid ground to be the bridesmaid this day. She’ll be a handful next out.

Brian Hernandez Jr. in the saddle for Ian Wilkes. She was 1/1 at CD making her 2nd start of the year. The red-hot bullet work had her ready, and she was forced 4 wide and eventually kicked out 6 wide making up ground in a hurry to be 3rd this day.

Joel Rosario in the saddle Arnaud Delacour. This son of Union Rags was a beaten favorite in the (G-3) Lexington. He was fractious in the gate, broke slowly, and shifted 9 wide into the stretch to be bested down the lane.

Julien Leparoux aboard for Mark Casse for this son of Pioneer of the Nile. 2/2 at CD and 1/1 on an off-track. He looked super strong prior to the race and ultra impressive in the Arkansas Derby. He bobbled at the break and was knocked around quite a bit. He regrouped nicely and made an honest effort to be fourth. – After the race his right eye was swelling badly and his next effort is up in the air. – When he comes back he’ll exact some payback for his backers.