The sport of racing lost a shining star. A personality that defined a time that needed a hero as the world stood in awe of her “Big Red.” – Penny Chenery, the beloved owner of Secretariat whose influence on the sport spanned decades and whose standing inspired generations of women in racing, died Saturday at her home in Colorado from complications of a stroke at age 95. – Rest in peace, Ms. Chenery.

Here are some runners to keep on your radar screen as we move forward into the next season. They may not have had a clean trip or were compromised in giving their best. – Best of luck from your friends at BetPTC.com!

#10 – Culture Carrier = Son of Kitten’s Joy for the Chad Brown barn. He is bred to relish the turf and had the services of Javier Castellano in the saddle. He tracked at the back of the pack and tipped off going two wide making a very strong bid. He finished 4th this day and his 2nd effort out should show a much-improved runner ready to seal the deal.

#9 – City Day = Daughter of City Zip for Christophe Clement. She was getting first time Lasix (24%) and making her second start moving from the dirt to the turf. Her dam has 6 winners from 9 starters on the weeds and she had a couple works on the deep Oklahoma training track at Saratoga. – She tracked near the back and swung out 4 wide making a solid bid to be 3rd. This is a great building block race for efforts to come.

#10 – Black Tide = He is a blistering speed type under the handling of Jose Lezcano. He is 6/9 ITM over the Belmont turf and exits the $150k West Point stakes. Trainer David Cannizzo has him cranked up and he shows his early foot every time. He led all the way and floated out 7 wide in the turn and when Lezcano got him back on task he did some bumping down the lane. He got the show-dough this effort and can wire them easily. Just keep your eyes peeled for race lacking a torrid pace. 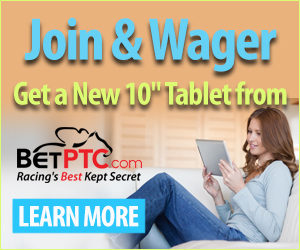 #10 – Inflexibility = Daughter of Scat Daddy shipping in from Woodbine. She broke her maiden on the Belmont turf and is 3/3 ITM on the sod. She has a good late kick and was making a step up the class ladder against this field. Chad Brown trainee with Javier Castellano in the irons. – She was wide early on and was forced to steady off of heels early and gave her best effort to be 4th. I think she is sitting on a big effort but you just can’t strut your stuff against better when you have any kind of traffic problems.

#12 – Performance Bonus = Chad Brown runner breaking from the far post this day. He is a solid 3/3 ITM over the Belmont green and was dropping down in condition claiming levels. He was a beaten chalk the last race and Brown comes back to win (30%) on this move. He was hung even wider after the break and saw about an 1/8th of a mile if not further than the rest. Javier Castellano managed to rally for 3rd and this was a respectable effort all things considered.

Rain, bitter cold, and sub zero windchill’s covered many ovals this past weekend. – It never stopped the mailman, and the horsemen always try to put on the show. When the winds start making that five degree night in the minus zone and rain holds court in areas that see little to no precipitation. Thoroughbred racing is at the mercy of Mother Nature. – Rest assured, the rain and cold won’t last forever and you’ll be seeing a full compliment of red-hot racing action soon.  In the meantime, here are some runners you’ll be waiting to see hit the entry box as they’ll offer up some good value at the windows. Best of luck from your friends at BetPTC.com !

Javier Castellano in the irons for Mark Casse. A solid daughter of Lookin at Lucky had her first start in 57 days. She was bumped at the break and checked back shortly after. The good news is she managed to get it all together and turn in a very impressive 3rd place effort. She was turning back from a mile at Churchill and this race may be sign of good things to come.

Paco Lopez in the saddle for Mike Maker, and they brought a son of Tale of the Cat to post. It was his second off the layoff shipping in from New York and he checked off heels losing his action. The upside was he still managed a show placing after getting a tough trip.

Javier Castellano in the driver’s seat for Todd Pletcher. This son of Pioneer of the Nile bobbled at the break and got back on path down the backstretch. He was in a striking position to make a run and appeared to call it an early day. This was his 2nd lifetime effort and he should improve for the trainer next out as the barn is known for getting all the bugs out ready to roll.

Corey Lanerie was in the saddle and his mount was making his 1st start in 55 days. He shipped in from Woodbine and came rolling 7 wide late with very good energy.

Joel Rosario in the saddle for Chad Brown. They brought a daughter of Scat Daddy who was a first timer coming off a solid work tab at Palm Meadows. She was bothered at the start and this took her mind completely off business. Brown will have her more focused as he wins (25%) on the turf.

John Velasquez was aboard this filly making her first start in 59 days shipping in from Aqueduct. She was hammered in and threaded the needle at the top of the lane. At the 1/4 pole she tipped off making her run when an opponent struck her with a whip across her nose. She jumped a shadow and tried to bite the other horse. – The good news is she won by 3/4 and will only get better from here.

He was a first time starter with Erick Rodriguez in the irons. Sent off the odds-on favorite he hit the side of the gate upon leaving and was off very slow. – This race is one for the trash bin as he’ll come back ready to reward his backers.