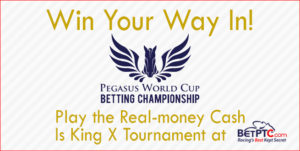 Besides retaining his Handicapper of the Year title by finishing first for the second consecutive year, John garnered the coveted $12,000 Pegasus entry.  That event is held Jan 25-26, 2019 at Gulfstream Park (and Santa Anita).  John also keeps the $9,007 in cash he won plus receives travel reimbursement ($500) and perks at the Pegasus Cup.

As a 9 time-NHC qualifier, John is looking forward to not only the exciting and challenging Pegasus contest hosted by the Stronrach group in late Jan, but also participating again in the $3M NHC contest in Las Vegas in early February.

Congratulations to all 39 contestants who qualified and competed in this year’s 15-week Cash is King contest and Nov Finals.

A bonus contest event is being held this Friday for the 7 participants who finished in the top 3 three or more times during the 15-week contest.  An additional $3,000 in prizes will be awarded in that special event.

Premier Turf Club is a U.S. based pari-mutuel account wagering provider that has been in business over 10 years.  BetPTC is regulated in the state of Oregon by the Oregon Racing Commission.

The company provides legal telephone and online betting services, safely and securely handling over $350 million in wagers.  In the summer of 2017, BetPTC released a mobile-friendly wagering platform at BetPTC.mobi.

Unlike the non-pari-mutuel off-shore bookmakers, BetPTC pays the tracks for the right to accept simulcast wagers on their races and co-mingle those wagers with the on-track pari-mutuel pools. Unlike the off-shore ADWs, a portion of all monies wagered through Premier Turf Club go to the horsemen and the local racetracks. It’s these payments that allow horsemen to run meets at Portland Meadows, country fairs and various racetracks throughout the United States.

The owner of Premier Turf Club started out in the racing industry as a horse owner and bettor. The BetPTC staff includes horse owners, bettors and industry professionals that have been involved in advance deposit wagering and simulcasting since their inceptions. The site is designed by horseplayers for horseplayers.